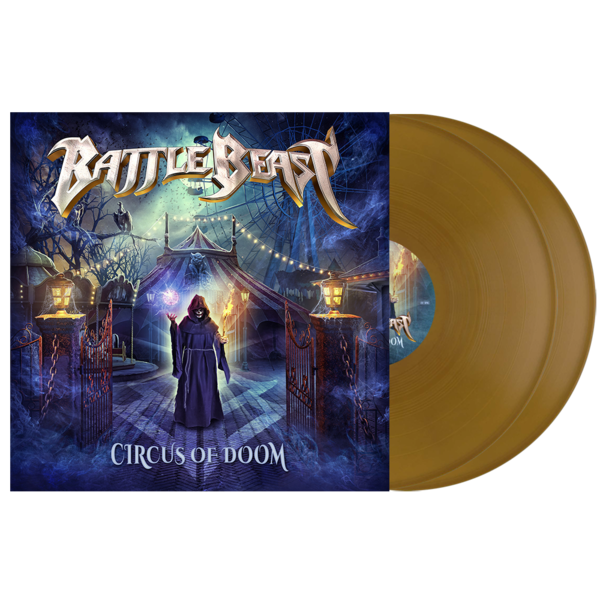 The new album by BATTLE BEAST "Circus of doom" will be released as a golden double LP in a gatefold. Exclusively available at Kapanen-Production-Store and limited to 500 copies.

NEW SHIPPING DATE DUE TO A SHORTAGE OF GOLDEN VINYL AS TOLD BY THE MANUFACTURER: 06.05.22

Update 09.05.22: We are ready to ship when Nuclear Blast deciedes to deliver the LP´s!

The release date of the LP differs significantly from the digipack! Please keep that in mind, if you put other products in the cart that you might want to have immediately, then it makes sense to place 2 orders.

After re-signing to Nuclear Blast in early 2021, the Finnish heavy metal sextet BATTLE BEAST are once again getting ready to unleash their force upon the world in the shape of their brand new masterpiece »Circus of Doom«. The album is set to be released on January 21st 2022 via Nuclear Blast and in true BATTLE BEAST fashion, the 12 tracks blend true heavy metal with pop and rock-vibes, paired with Noora Louhimo's unique voice. "Our goal was to make an interesting and absorbing album, with both lighter party songs and heavier stuff as well. In a way the whole album is like a joyful day at the circus. Full of enchanting surprises and wild carnival atmosphere", explains keyboardist Janne Björkroth.

Tracklist
1. Circus of Doom
2. Wings of Light
3. Master of Illusion
4. Where Angels Fear to Fly
5. Eye of the Storm
6. Russian Roulette
7. Freedom
8. The Road to Avalon
9. Armageddon
10. Place That We Call Home

Circus of Doom« was recorded at JKB Studios in Helsinki, Finland and produced and mixed by keyboardist Janne Björkroth, while the stunning artwork was created by Jan Yrlund.