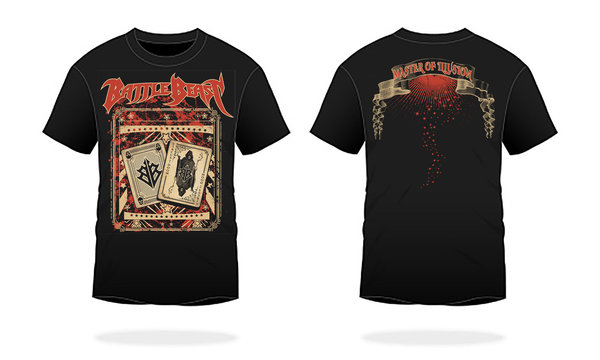 The  shirt for the first  singel release „Master of Illusion" is exclusicly availabel here  at kapanen-prodution store.

On 22.10.2021, the band revealed a stunning music video for the first single, 'Master of Illusion', directed by Markus Nieminen, that you can watch here:

Get the single digitally here:

Janne comments on the single: "The first single from the upcoming BATTLE BEAST album, 'Master of Illusion', is a groovy and catchy song that makes dance floors roar and disco balls explode.
The story of the song is about a self-centered, greedy, narrow-minded, and thoughtless character, who sows destruction all around without listening to or respecting others. The character may represent various things in the many arenas of power – for example, those of personal relationships, as well as in politics, and everywhere in between.
Despite these heavy themes, there is playfulness in the composition, lyrics, and production, and the small twinkle in the corner of the eye that characterises BATTLE BEAST."